South African fashion designers telling the African story are making their way to the global stage.

Working with beautiful African fabric and prints that echo our heritage and diversity, these talented individuals work with skilled artisans to produce innovative design and superior craftsmanship in luxury garments.

There are numerous competitions supporting local designers in South Africa. The upcoming Africa’s Got Style 2021 fashion event is an example. It is a fashion design competition that aims to support designers who can combine “African textiles and styles to make innovative wears.”

In this post, we take a look at four South African designers and share their success stories. They are: 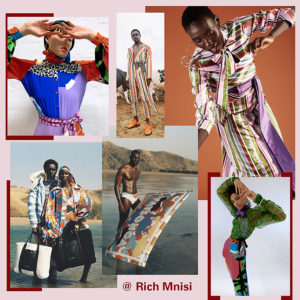 His designs are primarily inspired by African heritage and pop culture. He has been growing in the realm of fashion and is extending his creativity to the furniture sector.

His brand is named after him. The brand was born from Mnisi’s soul connection with the pulse and diversity of South Africa’s rich heritage and culture. He is a visionary inspired by many facets including film, music, art and nature.

Rich has been a South African style icon for some time. His story begins in 2014 when he established OATH Studio. The studio helped him figure out what his clients needed. In the same year, he won the Young Designer of the Year award held by the African Fashion International.

Over the years, Mnisi has been attracting the attention of famous global brands such as Coca-Cola. He has partnered with them to create artistic print designs beyond your wildest imagination.

In 2019, Mnisi was again recognised for his innovative work. He won the Emerging Designer of the Year award by Essence publication. The award was handed to him at Essence’s inaugural Best in Black Fashion Awards.

In 2019, he announced his partnership with Southern Guild. The group launched his new furniture pieces titled Nwa-Mulamula: Alkebulan. Most of his furniture pieces are beautiful and classy and tell a story about human experiences.

Mnisi’s stardom extends to regular features on the editorial pages of both local and international media publications such as Marie Claire, ELLE, Fashion Glossary UK, Sunday Times, Vogue (Russia and China), Mail & Guardian and others.

The Rich Mnisi brand will continue to break fashion boundaries, rising to improve its artistic expression through African heritage prints used in his fashion and furniture designs. 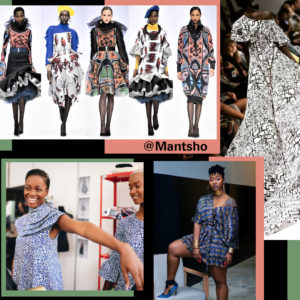 Palesa Mokubung is a talented Free State,-born South African fashion designer. She is the founder and creative director of the brand Mantsho.

In 2004, as a solo designer, she entered the South African Fashion Week and her designs attracted rave reviews in the fashion industry, giving her the opportunity to participate in various shows around the world.

Palesa became the first female African designer to collaborate with the Swedish fashion company H&M. The collection will be available in all South African stores as well as selected flagship stores in the United States of America, the United Kingdom, France, Spain, Portugal, The Netherlands, Belgium, Mexico, Chile and Israel.

She draws inspiration from the rich African culture incorporating creative bold African heritage prints on fabric that echo an African theme. Her designs are innovative with excellent craftmanship. Her ready to wear flattering silhouettes are sought after.

They designed a T-shirt with the bold Mantsho prints, emblazoned with the word “FEARLESS”. At least 20% of all proceeds will go to the 1st for Women Foundation to fight against the abuse of women and children. 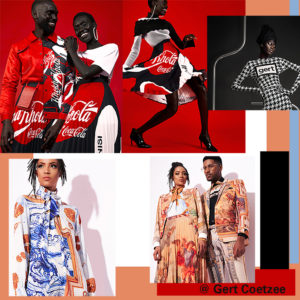 Gert-Johan Coetzee is a South African fashion designer. His fashion atelier is based in Linden in Johannesburg.

He specialises in couture red carpet gowns. He also has an online store selling ready-to-wear fashion and designer ranges. Coetzee is known for dressing South African and international celebrities at red-carpet events.

During Coetzee’s second year at college (2004), he won the High Fashion Award at the annual Vukani Awards. This is where he was spotted by the television personality Sandy Ngema.
He dressed her for the red carpet at the Durban July Handicap premier and also went on to dress her for two seasons as presenter of the SABC3 reality TV series Strictly Come Dancing.

His couture designs are worn at all major fashion events including the J&B Met, SA Music Awards, Huisgenoot Skouspel, You Spectacular and Miss World. International celebrities that have worn GJC dresses on the Holywood red carpet include Kourtney Kardashian Kristin Cavallari.

Coetzee is interested in technological advances in fashion and is constantly innovating his print and textile fashion collections.

In April 2013 he was the first South African fashion designer to use hi-tech 3D-printing technology in his SA Fashion Week Spring Summer 2013 “sea urchin” collection.
He collaborated with the Vaal University of Technology on the technical side, to render and print three-dimensional embellishments to incorporate into the garments.

Then in October 2013, at the next SA Fashion Week, he looked to new technologies again and collaborated with photographer Nicole Phillips to capture his all-pink Autumn Winter 2014 collection. He used time-slice fashion photography on an intricate set using 40 cameras firing simultaneously – a first in South Africa.

Coetzee believes in “fashion with a conscience” and is known for using his influence as a celebrity to bring attention to social issues, mainly concentrating on women. These include breast cancer awareness, women against violence and albinism.

In April 2013 Coetzee partnered with Shout, the South African anti-crime organisation and dedicated his Spring/Summer 2013 “sea urchin” collection to women victims of violence, in protection against the high levels of violence against women in SA society.

Inspired by the protective, dangerous spines of the fragile sea urchin, he created 3D-printed spikes which embellished his garments symbolising armour-like wearable protection for women. 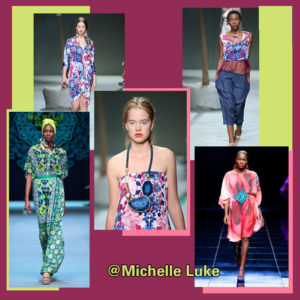 Michelle Ludek is another female style icon on the list of one of the richest fashion designers in South Africa.

After an extensive career in retail fashion in Europe and Canada, Michelle returned home to South Africa in 2007 to set up her own brand Michelle Ludek as a local designer that produces comfortable and flattering ready-to-wear collections geared for any occasion.

Michelle’s collection and offerings present a combination of impulsivity and playfulness in her prints.

Her easy to wear flattering clothing will give your wardrobe flexibility with its neutral tones as well as pops of colour that will keep you on-trend. This label allows you to exude femininity in everyday wear that is affordable yet sophisticated.

Michelle Ludek has an online fashion store offering an extensive range of women’s ready-to-wear apparel. Find an excellent range of dresses, pants, jumpsuits, tops, tunics and other clothes as well as pump shoes.

Her collection uses high-quality textiles that fit every occasion, depending on how you dress it up.

Michelle Ludek has stores at the V&A Waterfront in Cape Town and The Zone in Rosebank, Johannesburg.

There are many established and upcoming South African designers who will continue to use print and surface designs that resonate with the African theme and showcase them on international platforms. Proudly South African products are destined to make their mark in the world.